In the Midst of the Storm 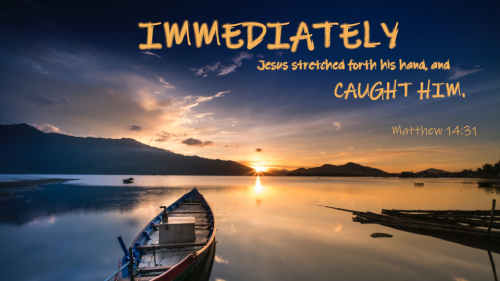 "And immediately Jesus stretched forth [his] hand, and caught him, and said unto him, O thou of little faith, wherefore didst thou doubt?" - Matthew 14:31

After the feeding of the five thousand, Jesus bids His disciples to get into their boat and sail across to Capernaum. While in the middle of the sea a tempest picks up. The waves and winds take control. After a perfect day on a hillside listening to the words of Jesus, the disciples aren’t prepared for the violent storm that has swept upon them.
As they’re in the middle of the tempest trying to keep themselves from sinking, they see someone…

“And when the disciples saw him walking on the sea, they were troubled, saying, It is a spirit; and they cried out for fear.” ~ Matt 14:26

It’s Jesus, but they don’t know it yet. Seeing their fear, He calls out to them, wanting them to know as soon as possible that He is there, and they have no need to fear.

The disciples are overjoyed by this news. Peter, barely able to believe that it is His Saviour, calls out to Him from the boat.

Peter steps out onto the sea and begins walking securely to his Teacher, but as he goes, he hears the boisterous winds and he notices the waves surrounding him. He takes his eyes off the Saviour, and fear once again takes over. He begins to sink, but before the sea can take him, his eyes find Jesus once more, and fixing them there he cries out,

Jesus immediately grabs his outstretched arm and walks back to the boat, with His friend now safe from the dangers of the fierce water.

Paul was a great leader in the church, zealous in his work. The Bible describes his old life as, “an Hebrew of the Hebrews; as touching the law, a Pharisee; concerning zeal, persecuting the church; touching the righteousness which is in the law, blameless.” (Phil 3:5,6). He had it good, the best life a Jewish man could ask for. Yet, all of this he put aside and considered it but loss for the sake of Christ.

And the Saviour said, “Come”. Paul stepped out of the boat, leaving all behind to follow Jesus. Taking that first step, the waves and winds didn’t calm, but began to pick up, and the storm raged about him. 2 Corinthians 11 tells us what Paul went through once he stepped out towards Jesus; stripes, beaten, stoned and shipwrecked, in weariness and pain, hunger, thirst, fastings, cold and nakedness, Paul knew what trials and disappointments were. Yet through it all he kept his eyes fixed upon the Saviour.

I used to wonder why it was that when I gave my life to Christ I still at times found myself in the midst of a storm. Why was it that trials came upon me, and still come upon me though I’ve done exactly what Jesus has said and “Come”?

“But I would ye should understand, brethren, that the things which happened unto me have fallen out rather unto the furtherance of the gospel” ~ Philippians 1:12

Paul says that every trial, every disappointment, was for the purpose of the gospel. Through his bonds other followers of Christ became bolder in speaking the Word (Phil 1:14), not only this, but through each test he was gaining precious lessons in obedience to God (Phil 4:11,12). And Paul wasn’t the only one; Peter was also learning as he entered back into the boat with Jesus.

When we are sincere in our walk, when Christ brings us through the various trials in our life, he doesn’t allow us to believe there was nothing to gain from being in the storm. After pulling Peter from the waves surrounding him, He beheld him with the tenderness He looks at all the members of the family of God, and He said, “O thou of little faith, wherefore didst thou doubt?” (Matt 14:31). “Why did you turn away from Me? I didn’t call You to come to Me amid the waves and then leave you to perish." Jesus was preparing His impulsive disciple for the time coming when a more ruthless storm was to come upon him. If Peter had learned this lesson of faith he would not have failed when that test came upon him…. He would not have denied his Lord.

A favourite verse of mine is found in Zechariah 13:9:

“And I will bring the third part through the fire, and I will refine them as silver is refined, and will try them as gold is tried: they shall call on My name, and I WILL hear them: I will say, It is MY people: and they shall say, The Lord is my God.”

Do you know how silver is refined?

A man once went to a blacksmith to see the process of refining silver. He watched as the blacksmith placed the silver he was working with in the midst of the fire. The blacksmith explained to the man that the silver needs to be in the hottest part of the flame where the impurities would be melted away. The blacksmith sat and held his silver in the fire, not taking his eyes off of the little piece of metal, knowing that if he allowed the metal to come out too soon the impurities would remain, but, if he kept it there for too long it would be destroyed from the heat. The man, watching in amazement at the care and commitment demonstrated in this work, turned to the blacksmith and asked, “how do you know when the silver is finished?” A small smile coming to the blacksmith’s lips he answered, “when I can see my reflection in it.”

This story changed my perception of the storms that rage about me. Jesus never calls us to endure afflictions and then leave us there by ourselves. No. He’s there the entire time, holding us, watching us, eyes never closing (Psalms 121:3,4), fixed upon us as we walk amid the waves. Day by day He is instructing us by the different circumstances and trials we may face, each day we’re preparing ourselves to either be overcome through temptation or gain complete victory in this great controversy.
And just as Peter was learning as he was walking towards his Saviour, it is only through realising our own weakness and looking steadfastly unto Jesus that we can walk securely.

“The fact that we are called upon to endure trial shows that the Lord Jesus sees in us something precious which He desires to develop. If He saw in us nothing whereby He might glorify His name, He would not spend time in refining us. He does not cast worthless stones into His furnace. It is valuable ore that He refines.” (The Ministry of Healing pg. 471)