The Art of Christian Liberality (based on 2 Corinthians 8) 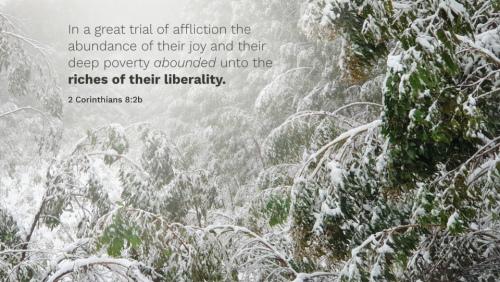 "How that in a great trial of affliction the abundance of their joy and their deep poverty abounded unto the riches of their liberality." - 2. Corinthians 8:2

Have you discovered the joys of selfless giving? Christian liberality is a wonderful gift, straight from God!

This article is a short study on 2 Corinthians 8.

2 Corinthians 8 is fascinating and easy to follow. Let's get started:

God Gave Liberality to the Church (a gift of grace)

And, brothers, we make known to you the grace of God which has been given among the churches of Macedonia.
~ 2 Corinthians 8:1

Paul wrote to the Corinthians to tell them about a marvellous effect of the grace of God.

Something special had been happening in and around the churches of Macedonia...

In the New Testament, Macedonia is a Roman province. It used to be part of Alexander the Great's huge empire (see our Bible study The Metal Man). The Bible first mentions Macedonia in Acts 16.

In Acts 16:9, God gave Paul a night vision. An unknown citizen of Macedonia appeared to Paul.

“Come over into Macedonia, and help us,” the man plead.

Paul obeyed, and he helped new believers become a healthy church. Lydia, the seller of purple, was among its first baptised members.

This is how the churches of Macedonia began.

Why did Paul write about the grace of God among them?

Riches Out of Deep Poverty and Affliction

That in much testing of trouble, the overflowing of their joy, and the depth of their poverty, abounded to the riches of their generosity. For I testify that according to their ability, and beyond their ability; they gave willingly.
~ 2 Corinthians 8:2-3

Now, how about their mental state and way of life in these circumstances?

This superabundant giving makes no earthly sense, does it? Give away money while in deep poverty - crazy!

If you want to be perfect, go, sell what you have and give to the poor, and you shall have treasure in Heaven. And come, follow Me.
~ Matthew 19:21

Heaven was their real home.

They had every expectation of living with Christ - forever!

They lived as pilgrims and strangers in this world, and had no need for its treasures.

The riches of their abundant generosity was wealth to them. A wealth of joy and character.

Heaven contains their treasures. God will reward them based on the spirit they gave with.

What made the Macedonians live and give like they did?

Why Giving Yourself to God Makes All the Difference

And not as we hoped, but first they gave themselves to the Lord, and to us through the will of God.
~ 2 Corinthians 8:5

Christ makes all the difference to the Christian.

Christians attempt to live like Christ without giving their lives to Christ.

The Macedonian Christians did the works of Christ because they first gave themselves to the Lord (see Why Do We Live?).

They were the opposite of this kind of Christian:

They profess that they know God; but in works they deny him, being abominable, and disobedient, and unto every good work reprobate.
~ Titus 1:16

And the proof of this truth:

For we are his workmanship, created in Christ Jesus unto good works, which God hath before ordained that we should walk in them.
~ Ephesians 2:10

Paul used the Macedonians as an example to the Corinthians of Christian liberality.

Christian liberality, both because it was obeying Christ, and from Christ.

Let's turn now to look at Christ as we wrap this study up.

Jesus Christ isn't well known for his riches. He left them behind in heaven:

Proving the Sincerity of Love

I do not speak according to command, but through the eagerness of others, and testing the trueness of your love. For you know the grace of our Lord Jesus Christ, that, though He was rich, for your sakes He became poor, in order that you might be made rich through His poverty.
~ 2 Corinthians 8:8-9

How does Paul finish his appeal to the Corinthians to give like the Macedonian Christians?

He linked love with liberality.

Specifically, he revealed that liberality was a proof of love.

And Christ is the greatest example of liberality proving love.

Jesus was incredibly rich in heaven - by any and every measure.

But for our sakes He made Himself poor (not by chance or whim!).

We were poor. In the “deep poverty” of sin. Disconnected from Life.

Then, Jesus swapped His riches for our poverty (see Who Cares About Me?).

His incomprehensibly large sacrifice proved His love to humanity. Because of it, this very moment through Jesus we can grasp eternal life, love, peace and purpose.

Jesus proved His love through liberality.

Will you take up Paul's challenge and prove your love for Christ through Christian liberality?

Think of the needs around you. Where can you start with joyful, abundant giving?