I Will Change Your Name 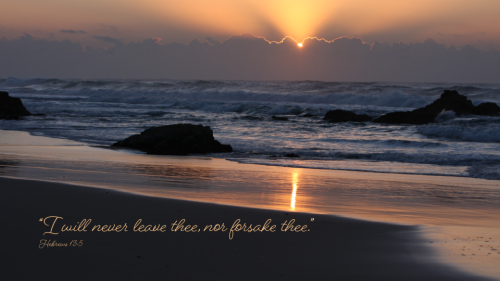 "[Let your] conversation [be] without covetousness; [and be] content with such things as ye have: for he hath said, I will never leave thee, nor forsake thee." - Hebrews 13:5b

Have you come across this verse before?

“To him that overcometh I will give to eat of the hidden manna, and I will give him a white stone, and in the stone a new name written, which no man knoweth saving he that receiveth it.” (Rev 3:17)

Let me start with a short story before I share how I came across it again recently.

Quite a few Sundays ago I was driving back home in the dark and rain from visiting with my grandma. I was looking forward to completing the bit more than an hour drive and climbing into bed to be rested for the busy week coming up.

It wasn’t long after those thoughts that I realised that was not what was going to be happening that evening. Losing control, my car spun and the next thing I remember is coming to an abrupt stop with the jolt and loud noise of a car running into me. Coming to my senses I realised that we were still in the middle of the road and needed to act quickly. Thankfully a man came up soon after and pulled over and jumped out to help us move our cars out of the danger of anymore upcoming traffic and then organise a tow-truck. We both waited for our friends/family to come and pick us up.

Needless to say, it was a shocking experience. My legs were shaking so bad I could barely stand. Thankfully just our cars were damaged and our lives were persevered.

Over the coming days what happened sunk in more, I found myself shying away from things. Not wanting to drive again, not wanting to face the reality of a smashed car, not wanting to get on with the tasks I needed to complete.

I was expressing these thoughts to a friend and they came back with the comment: “Ask yourself how does being timid serve me? Identify what you get out of the emotions you display and you will quickly identify some greater rewards to be had from some other emotions that you would rather be displaying.”

At first I was confused. I reasoned, I’ve had a car accident and I’m in pain and I’m scared. I have a reason to feel timid. That was exactly it though. It’s not anything I could do to change myself.

The lyrics to a song that I heard the following evening, as I lay in bed, helped me to understand:

I will change your name

You shall no longer be called

I will change your name

Your new name shall be

Faithfulness, friend of God, one who seeks my face.

God has promised to give us a new name!

You know, there was another person who felt similar to me. His name was Jacob – meaning deceiver, and he wrestled with the same thought processes as me. Let’s set the scene.

Jacob was a twin. The second born. In Bible times the first born son was given the privilege of an inheritance and spiritual blessing. Jacob was encouraged by his mother to deceive his blind father and get the birthright for himself. To get what he wanted, what he thought was best and what he even thought God thought was best, Jacob took things into his own hand.

When Jacob’s brother, Esau, become aware of what had happened, there was anger in the household and Jacob was forced to flee. On his flight to his uncle’s place, he laid down to sleep on the ground with a rock as his only pillow. The burden of guilt lay heavy on his heart. “Then he dreamed, and behold, a ladder was set up on the earth, and its top reached to heaven; and there the angels of God were ascending and descending” (Gen 28:12). God felt compassion and mercy towards his now fugitive child, and as Jacob saw his unworthiness and failure, the Father was able to give assurance that:

Several years had passed and we find God clearly leading Jacob to traverse the same ground and return home for reconciliation. Jacob now was married and had children, servants and flocks as part of his company. But as he made the journey the memories of his past – his deception, lying, sin, guilt, shame and more came flooding back. He was coming back home to visit his long lost brother, but the time of separation and the terms they left on gave concern for an unhappy reunion. These burdens lay heavy on his heart as he prepared the logistics of keeping his family physically safe with the soon encounter with his brother.

When the evening was come “Jacob was left alone; and there wrestled a man with him until the breaking of the day.” (vs 24) In the wilderness, burdened and troubled, there was potential for enemies, wild bears, or many other dangerous things. Alert and concerned for the welfare of his company, Jacob wrestled back all night and did not prevail.

It wasn’t until the break of day, when weary from the fight, the “enemy” revealed himself by just touching Jacob’s thigh and his hip disjointing. Immediately the realisation that this fight was not just with another man like himself, but with the Son of God – Jesus!

“Let me go, for the day breaks” (Gen 32:26) the supposed enemy requested. Jacob refused saying, “I will not let thee go, except thou bless me.” Had Jacob not realised his sin and had the assurance from God’s forgiveness previously, this request would have been presumption.

Let’s return back to my story for a little bit. In my timid state a day or so after the crash, I think of the “what if’s”. What if I had gone away with my friends that week, I wouldn’t have been driving on that road I crashed on. What if I’m not meant to be working where I am. What if it’s presumptuous to just be a volunteer and not be working to earn a salary. And the list goes on.

These thoughts had gotten me down, along with the realisation of the financial situation relating to it, and as the Sabbath was coming in on Friday evening I felt myself in a really discouraged state. As I tried to find consolation in turning to God in prayer and reading, I came to this passage in Thoughts from the Mount of Blessing that spoke to me so strongly:

“If you have given yourself to God, to do His work, you have no need to be anxious for tomorrow”.

My doubts were rebuked. Like Jacobs reassurance in the most discouraging and hopeless time that he would never be left or forsaken.

The “what if” doubts of the week were no longer valid. Instead they turned into “what if” blessings. What if I crashed into a more expensive car? What if a truck had come around the corner and killed me? What if no one had come and I spun for who-knows how much longer? What if my car had rolled? What if I had been injured more or even died?

All of a sudden, feelings of gratefulness replaced the feelings of discouragement. I knew that God had a reason for allowing this to happen.

“And we know that all things work together for God to them that love God, to them who are the called according to his purpose.” ~ Rom 8:28

We have been promised a new name!

We come to the point of recognising that He is the only one that can change ugliness into beauty, our pain into healing. Our timid feelings into confidence, our loneliness into a friend of God. Then we can simply give God the permission to make the necessary changes.

Do you want to choose today to claim your new name?