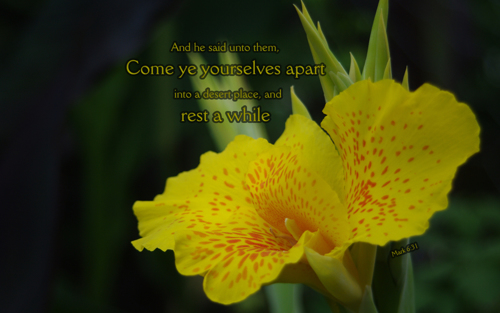 "And he said unto them, Come ye yourselves apart into a desert place, and rest a while: for there were many coming and going, and they had no leisure so much as to eat." - Mark 6:31

Did you know, the human body was never designed to work non-stop? Yes, that's right. God wants us to put aside time to rest. We're not talking about our regular sleep here (although that's important too!), but rather a time to step back from the cares of this life, and be refreshed.

One of Satan's traps is to push us to the very limits of our physical, mental and emotional endurance, until either our health breaks or we lose our connection with Jesus, or both!

Let's take a moment to consider our loving Saviour, who himself experienced what we experience. His days of ministry were packed with needy people craving for his healing touch, and kind words. The emotional and physical strain on Jesus must have been very great! Not to mention the men who were doing their utmost to destroy and hinder His work.

Yes, Jesus knows the weaknesses of our poor human frame. He doesn't urge upon us the necessity of ceaseless toil. Listen to what Jesus said to His disciples, during a particularly busy time of ministry labour.

Come apart and rest a while!

There is danger if we do not heed these words. Yes, time is short, and we must work with every muscle and fibre of our being to save others and hasten Christ's soon return, but not at the expense of our health and our connection with Jesus.

We should come aside from the cares and burdens of life, seeking time for rest and communion with God. Not for selfish gratification, but so that we can be refreshed and better prepared for future labour.

Come apart, and rest a while.

I found this so helpful. Thank you - and bless you!

Blessed by reading this

Thank you for this gentle reminder to take care of the temple of THE HOLY SPIRIT...I feel better already...we bless you today for sharing THE WHOLE GOSPEL

As I was pondering direction for several days, I asked the Lord to give me a scripture this morning. And He surely did. After I typed in the scripture, I came across your website and know now what my direction is .....after almost two months of ministry labor. Thank you for this and Lord Jesus, thank you for the answer. Sometimes we don't realize we need rest because we are so busy in ministry and we forget about ourselves. Thank you again.ðŸ˜Š

The Bible says in quietness and confidence shall be your strength. Pray and ask God to help us set aside some time throughout each day so that we can draw peace from the Lord and walk away with confidence and the power of God resting on us to walk in victory!

A secret that I held dear to my heart, which I wish to now share with the world, was a burden I faced with my ex-boyfriend, what my friends, and family were unaware of was the resulting after affects of how I took advantage of my ex-boyfriend, because I were alone in my life, as I entered into the relationship, I found a way to take advantage of him, through a woman whom he was having an affair with during the time he was in a relationship with me. When I left my ex-boyfriend I left him with a woman who believed she had taken someone away from another woman who meant the world to him, but it was the opposite, in trying to get out of the relationship, I took advantage of the person he was having an affair with, seeing she were young, and naive, and trying to get into the country by having his child, while he were dating me, the woman's mind that was up in the clouds, believed she would come to Canada living a bold, and beautiful lifestyle, where she had lured the young man from Brooke Logan, what she had lured herself into, was in creating a life for herself, where she would of been better off in her own country, but I thank her in many ways for having the mind set she did, in allowing me to find an escape from my ex-boyfriend who I lived in misery with for all the years I should of never been with him, pushing my mind to the brink of insanity, I still have yet to remember, if only, one wonderful moment I spent with him. The escape that came from my release of this person, led to better days, I found my sanity once again, and where my life took me, took me back to the paradise, not only I dreamed of usually, but lived by, thanking the Lord for the opportunity he gave me to find the rest my mind required, and in allowing me to set the world on fire again through my abilities that came with reciprocating my ideas on paper, due to my new found appreciation of an old life that became new again, and all due to a gracious God that led me in the understanding, that where the mind leads, the soul should follow in a peace, and harmony, leading to the constant escapes of a world that should be lived by a natural process of looking towards, what brings peace, and rest to your life, by way of love.

When I have the typical conversation with people, with what I possibly do with my time, I always receive the same reaction from them, "she actually does nothing at all," and this to me has been the usual compliment, I often tell people in response, " I am nothing," and I believe this is why we embrace the day of rest, to acknowledge in this world, that our accomplishments should be the last ways we look at ourselves, and that everyday should be a day of rest, in always knowing, what we accomplish, should be nothing at all, just the pleasures we receive, and the lack of struggles we face, among the insults of people, who know no rest, and with pity, I often tell them, as most would, " I might be nothing, and that I am, but you, or no one, will never be entitled, to leave me with nothing at all." Enjoy your day of Rest!!

Try religious nutcase. Emmanuel has promoted himself all over the internet to be some sort of pious guru.

Emmanuel are you gay? or just effem?

Thanks for this I need to rest in Him.

Yes, Valda. The Sabbath is God's way of supplying our needed weekly rest.

Also I think we need to take a few days out every so often to dedicate to quite time with God.

Indeed....a good message that speaks to my soul! Yes , there is the daily rest (sleep), the weekly rest (the weekend), and the yearly rest - ie connection with people we may not normally connect with throughout the year - if we don't plan this 'rest' then it may not happen - our yearly holiday.

It was such a timely MSG from God to me! I personally consider myself blessed for being a part of God'd plan. If it was not for his grace, I would not have survived. Thanks alot for dropping in :D

Yes, it is so true. Recently, I came apart to rest awhile. Unfortunately, I waited until I was sick of being sick! Now I am well again, and ready once more for work, but I don't think I would have needed to rest as long as I did if I had rested sooner! It is naturally hard for me to rest when there is work to do, but I realise that rest is definitely necessary.