Whose Child are You? 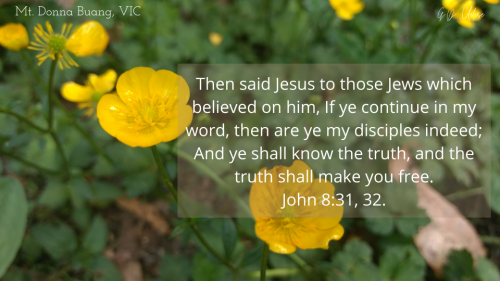 "Then said Jesus to those Jews which believed on him, If ye continue in my word, [then] are ye my disciples indeed;" - John 8:31

Then said Jesus to those Jews which believed on him, If ye continue in my word, then are ye my disciples indeed; And ye shall know the truth, and the truth shall make you free.

"And again, I will put my trust in him. And again, Behold I and the children which God hath given me. Forasmuch then as the children are partakers of flesh and blood, he also himself likewise took part of the same; that through death he might destroy him that had the power of death, that is, the devil; And deliver them who through fear of death were all their lifetime subject to bondage." Hebrews 2:13-15. Christ has said that God has given us to Him and that we belong to Him (v.13). He took on flesh for our sake, and now He invites us to be partakers of His Spirit; His body. If we as Christians claim to be followers of Christ, then we need to reflect just that.

In John 8:12-59, we have the story of Jesus preaching about being the light of the world, and sharing the Character of God, and how He had been sent to reflect just that to all in the world. Picking up the story in verses 28-59, conversation between both Christ and the Pharisees begin to take an interesting turn. Here Christ shares about how when the Son of Man is uplifted, that His Father indeed shall be lifted up; that God will be glorified. He then goes on to share with those listening, that He is the Son of God; the Appointed; the one whom God has sent to redeem and set mankind free, "Then said Jesus to those Jews which believed on him, If ye continue in my word, then are ye my disciples indeed; And ye shall know the truth, and the truth shall make you free." John 8:31, 32.

. The Pharisees then turn around claiming to be the "Seed of Abraham" and that they would not be in bondage to "any man" (that referring to Christ).

They answered [The Pharisees] and said unto him, Abraham is our father. Jesus saith unto them, If ye were Abraham's children, ye would do the works of Abraham...

Ye are of your father the devil, and the lusts of your father ye will do. He was a murderer from the beginning, and abode not in the truth, because there is no truth in him. When he speaketh a lie, he speaketh of his own: for he is a liar, and the father of it...

It is not by title that we inherit the kingdom, neither is it by title that we are called sons of God, but rather, it is by our character which identifies us to whom we truly belong. The Pharisees assumed their salvation to be safe because they were descendants of Abraham (they had faith in a man, Abraham, rather than Christ), whom God had given blessing and promise to, however, one thing which the Pharisees had missed was the key element that Abraham himself, knew of the promise of Christ's coming to the earth, to liberate man, and that if he was to accept the Saviour, he would be saved (the faith of Abraham rested on no man, but on God Himself). Sadly, the Pharisees, and many others past, present, and future, will miss this opportunity and reject the Saviour, and will think that they are safe, purely because of a title.

For God, it is not just about a title; it is not enough to just have the title, "Child of God", He desires to have us, to be in an active relationship with us. Can a man say to someone, this woman is my wife, yet, has never even spoken or spent time with her or vice versa? Not really. She may be his wife because a paper says it (by title), but she is not his wife because he does not even know who she is, what she likes, etc (through relationship). The same works for God. The Pharisees knew that they were descendants of Abraham, yet DID NOT reflect the CHARACTER which Abraham had CULTIVATED by KNOWING WHO GOD WAS! They had not taken the time to cultivate and harvest Christ's character, as their father Abraham did. Hence Christ's response when he says, "44Ye are of your father the devil, and the lusts of your father ye will do. He was a murderer from the beginning, and abode not in the truth, because there is no truth in him. When he speaketh a lie, he speaketh of his own: for he is a liar, and the father of it...47 He that is of God heareth God's words: ye therefore hear them not, because ye are not of God."

In order that we might be a partaker in the sacrifice of Christ, and to be called Sons and Daughters of God, our character must reflect the Son of God, Christ our Lord, in order for us to receive His seal in our hands and foreheads. So that when the time comes, Christ can boldly and triumphantly say, "...Well done, thou good and faithful servant: thou hast been faithful over a few things, I will make thee ruler over many things: enter thou into the joy of thy lord." Matthew 25:21. Let us ask God to search our hearts and to refine our characters so that we may be a true child of God.