Being Prepared for Your Husband

Are You Ready and Waiting? 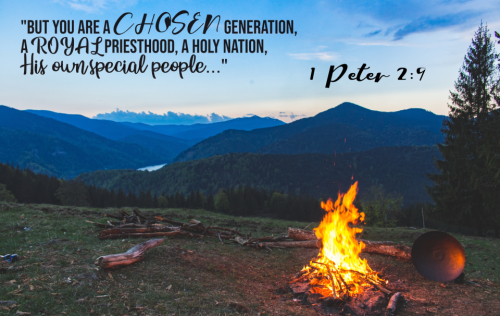 "But ye [are] a chosen generation, a royal priesthood, an holy nation, a peculiar people; that ye should show forth the praises of him who hath called you out of darkness into his marvellous light:" - 1. Peter 2:9

"Husbands, love your wives, even as Christ also loved the church, and gave himself for it…” ~ Ephesians 5:25

There is a man who is ready and waiting to be married back in the traditional Jewish time. His father sees this, and he begins to look for his son’s future wife. He looks, and looks, and comes upon a young woman who he believes is suited. So, he brings the two together. It’s important to note that it’s not just the father and son who have to agree to this marriage, but the woman’s choice was respected, she had a say in whether she wished to be married to the father’s son or not.

When and if she says “yes”, a marriage contract must be made. This is where the man promises to love and care for his bride, giving himself to her, and he pays the price for her. The woman also promises to keep herself for her husband and yields her life to him.

Once the betrothal ceremony has taken place where the man and woman publicly declare their intention to become married, the two separate.

The man returns to his father’s house and prepares a place for his bride. He does this, not knowing when it is he will go to collect his bride. His focus is this house. He builds it with her on his mind. He makes it especially for her, to make her happy. She is the reason for his work.

During this time of waiting for her groom to come and collect her, the woman isn’t sitting idle. This time of waiting is filled with her preparing. She’s getting ready for her wedding and the life to come after. She is especially preparing her wedding garments and the lamps. Making sure to be ready at any moment to welcome her groom. Not knowing the day or the hour of his arrival she lights her lamp each night in preparation for the wedding shout.

The time is long, and she waits faithfully, not knowing how long it could take her groom. There is no communication between them to know if he’s still building her a place. She simply rests on his promise that he will return. It could take up to a year, it could take longer, but she rests on his word faithfully.

The time finally comes, the father of the groom inspects the place and deems it worthy to receive his bride. This is it, this is the time the son has been waiting so long for. He’s promised his love to his bride, he’s paid the price, and done the work, now he can finally take her home to live with him.

There is no waiting now, no slow movements. He goes. He fetches his wedding party and goes straight to the home of his bride. The wedding shout is given in announcement and the joyous occasion is finally taking place. The wait is finally over. The two are together at last.

Our Heavenly Father wanted us to be a part of His family. So, He chose us for His Son, He gave us to Him.

But, this isn’t a forced relationship with Christ, it’s our choice. Do we wish to enter this marriage, or do we wish to live apart from Him?

If we say “yes” we enter a marriage contract with Him. He promises to love and care for us, He’s already given Himself for us and payed the ultimate price, a price that we don’t deserve, but one that He is willing to give. All He asks is for us to keep ourselves for Him. He asks us to:

He asks us to remain pure for Him:

And He asks us to yield ourselves to Him,

"Wives, submit yourselves one to another in the fear of God. For the husband is the head of the wife, even as Christ is the head of the church: and he is the saviour of the body. Therefore as the church is subject unto Christ, so let the wives be to their own husbands in every thing." ~ Ephesians 5:22-24

We make our promise and have a public ceremony to show our commitment - baptism.

Now is the time apart. We’ve accepted Christ and His payment for us, and we’ve made our own promises to Him. He’s now preparing a place for us

“Let not your heart be troubled: ye believe in God, believe also in me. In my Father’s house are many mansions: if it were not so, I would have told you. I go to prepare a place for you. And if I go and prepare a place for you, I will come again, and receive you unto myself; that where I am, there ye may be also.” ~ John 14:1-3

But, just as the woman wasn’t to sit idly, so we also have a work to do to prepare for the life to come. We are to prepare our robes, which are the robes of righteousness. We are to look beautiful for our Husband (Isa 61:10).

We are to prepare our lamps:

The time of waiting and preparing may seem long, it may seem like our Husband is not coming back. We can’t see Him, we can only go by His Word. We have to trust His promise that He will come back.

While Christ is in heaven preparing the place for His bride, He doesn’t know how long it will take, “

“But of that day and that hour knoweth no man, no, not the angels which are in heaven, neither the Son, but the Father.” ~ Mark 13:32

When He believes it’s time, He goes to His Father. The Father inspects the place and deems it worthy. It’s time for His Son to collect His bride.

Christ doesn’t wait now. It’s been so long, it’s finally time to bring us home. He calls all His angels. He gathers all. It’s time to collect the ones He’s been given, the ones He loves, the ones He’s paid for with all He had. He wants all to be there for this wonderful occasion.

He comes. And He’s not quiet.

“For the Lord Himself shall descend from heaven with a shout, with the voice of the archangel, and with the trump of God…” ~ 1 Thess 4:16

He calls out to His bride. It’s time, He’s finally bringing us home.

A beautiful story. But what if the story doesn’t play out the way we hope? The bridegroom comes, He’s waited so long for His bride, He’s spent this long amount of time making her a home, trying to think of exactly what would make her the happiest, He’s given everything for her. He comes, excited; overjoyed, hoping to see her waiting, ready for His call.

He comes, and looks up into the window where He expects to see her lamp burning bright. But He doesn’t see it. It’s not lit, she’s not ready. She grew tired of waiting, and became distracted with the other things of this life. Or He finds that she’s given her affections to another.

The Bridegroom turns away.

The time of our wedding is fast approaching. Have you been preparing your robes? Are your lamps trimmed and burning? What will Christ find when He returns? His bride ready, excited to finally receive Him Who’s paid all for her? Or will He find her giving her affections to another?

Are you preparing for your Husband?