Gaining the victory over Satan's strongholds. 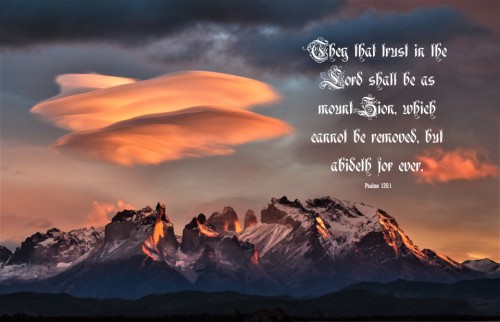 How can I turn my weakest points into my strongest? History gives us a striking example.

Many fierce nations lived in the land of Canaan. One of the most feared were the Jebusites. Their city of Jebus was considered impregnable. They frightened and discouraged the spies of Israel at the very borders of the promised land.

Even though God worked miraculously for Israel leading them out of Egypt, promising them the victory, even then, they didn’t want to face the Jebusites.

Long before this, God had specifically promised Abraham that the land of the Jebusites would be given to His people (Genesis 15:21).

This promise was again given to Moses when God spoke to him out of the burning bush. God specifically said that the land of the Jebusites would become theirs (Exodus 3:8).

This becomes fascinating as we see what happened to impregnable Jebus and their castle of Zion.

For 400 years after the conquest of Canaan, the Jebusites remained unconquered... that is, until the reign of King David.

Here was a city and a fortress that had been looked upon as impregnable. But under the command of David and with God's help, Jebus becomes Israel’s capital and its name changed to Jerusalem and Mount Zion.

What does Zion mean? It means monument or raised up. What a testament to how God could raise up, from one of the most impregnable strongholds of heathenism, a monument for His honour! It was here in Jerusalem, and specifically Mount Zion, where God especially revealed His presence. Here, the house of God was built, Solomon’s great temple. What a contrast!

Beautiful for situation, the joy of the whole earth, is mount Zion, on the sides of the north, the city of the great King.
Psalms 48:2

For the LORD hath chosen Zion; he hath desired it for his habitation.
Psalms 132:13

It is even used as a model for us. "They that trust in the LORD shall be as mount Zion, which cannot be removed, but abideth for ever.” (Psalms 125:1) We can be like mount Zion; our lives can be transformed into God’s stronghold.

Do you know what is even more beautiful? In the new earth (after Christ returns) God chooses the name “New Jerusalem” as the name of the principle city! In that name is a symbol of victory—of God triumphing over the strongholds of Satan, not only in human hearts but also in the entire world.

And I saw a new heaven and a new earth: for the first heaven and the first earth were passed away; and there was no more sea.
And I John saw the holy city, new Jerusalem, coming down from God out of heaven, prepared as a bride adorned for her husband.
And I heard a great voice out of heaven saying, Behold, the tabernacle of God is with men, and he will dwell with them, and they shall be his people, and God himself shall be with them, and be their God.”

God’s city will be forever remembered as Jerusalem, a place of great victory over evil.

In your life, do you feel like God has helped you to conquer most things, but there remains a "heathen stronghold" or two? Perhaps it's discouragement, or selfishness, or discontentment, or some addiction or sin... Whatever it is for us individually, God is wanting to claim that very stronghold as especially His and turn it into a place of great victory.

God speaks to you today: “For the LORD hath chosen Zion; he hath desired it for his habitation.” (Psalms 132:13)

Today, like then, our God is in the business of making the strongholds of our lives, capitals for His glory.

Whatever seems most difficult to overcome, God can turn it into His stronghold. He wants to make it a great victory in our character and lives.

Dear reader, give Christ your whole heart and life. Be encouraged. Trust in Him and be like mount Zion.